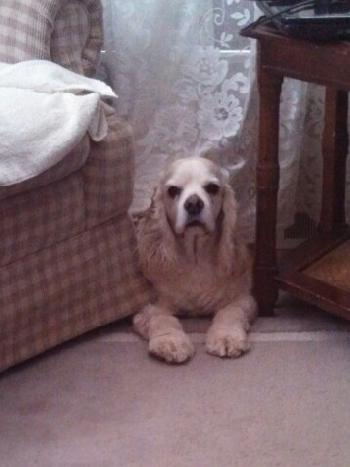 Squeeze (Ceasar)
On September 3, 2013 I said goodbye to my best friend. He came into my life six years ago as a foster. I wanted to help him fin his forever home. In a few short weeks he and I had connected like no other dog I have ever known. He loved me and I loved him. He had his forever home , and it was right by my side. He was always next to me. I miss his head on my knee when I watch tv, or the feel of him snuggled against my back when I slept, or just the joy he showed when I would come home. All the time I thought I was making his life better, but in reality he gave me unconditional love and devotion. As they say, I wonder who rescued who? Squeeze you will always be in my heart. Sleep well my precious little boy. Love, Mom

Tiny Bubbles
Tiny (Bubbles) 2000-2011 It wasn’t a long life, and it wasn’t an easy life, but she impacted mine more that she would ever know. I adopted Tiny because she looked so much like a miniature version of my beloved Bubbles. No two dogs could have been more different. Bubbles was spoiled from the moment I brought her home at 12 weeks, and while Tiny was too, she didn’t get to my home until she had spent 8 long, hard years in a puppy mill. Her trip home was via truck and car caravan from Missouri where the puppy mill was shut down. Unable to be adopted in her home state she traveled a long road to Ohio via a kind hearted trucker and the rest of the way into Michigan via volunteers for the Michigan Cocker Rescue. Literally just a tiny thing, only weighing around 20lbs she bore the scars of her former life...one on her hip, and a tear on her ear, reminders that not all dogs are treated well. For all that she went through, her little tail and whole body would just wag in her own happy go lucky way. She had her own way of letting you know it was time to eat....and she knew the time almost to the minute every day. One of my favorite memories of her will be the way she would sit at her bowl and have a leisurely meal. Even though there were many dogs in the house she knew she would always have access to food and water and she no longer had to “fight” for the basics in life. Her favorite place to sleep was in my closet. I don’t know why she chose that spot, but almost from day one she claimed it as her own. Of course I had to place a pillow and an old quilt in there for her comfort and I think she was very comfortable in her nest there. She was one of two dogs, Bailey being the other that could manage to get under the deck. When the weather would be hot, she would carve out a spot under one of the sets of steps, and sometimes wriggle her little self completely under the deck. Amazingly until she got under there this summer, she could always manage to wiggle her little self out too. This summer she just couldn’t seem to remember how, so the front of the deck had to come off so she could be “rescued”. Tiny was never what you might call a “cuddler” and sometimes I would wonder if she knew the difference in people, but one day Megan and Michelle wanted to take the dogs to the beach....Tiny refused to go with them. I guess she could discern just fine who she would and who she wouldn’t “go” with. Even though I wasn’t aware of it, I had earned her trust, and once I knew I had it, I tried hard to never let her down. Earlier this year, she had MAJOR surgery to remove what proved to be cancerous growths, and in typical Tiny fashion she bounced back and showed her happy go-lucky self, wagging her whole body for the staff at the vet’s as soon as she possibly could. She only had 6 more good months, but they were good months for her. Tiny you had much to teach me about attitude and forgiveness, and you will be missed. 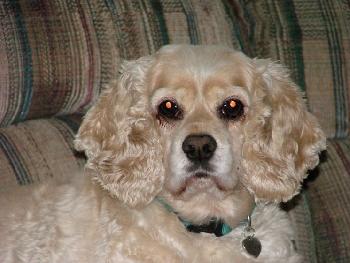 Lacey
Lacey, the perpetual middle child (or dog) It seems like it was just yesterday, but in reality it was well over 15 years ago that Nancy and I made a trip to Branch and picked out this almost white little cocker spaniel puppy, who soon was named “Lacey”. She was one of several pups in the litter and if I could I would have taken them all home as the “breeder” had them in dismal conditions. Lacey joined Bubbles at home, shortly after I lost “Peaches”. I remember mom wanted me to name her “Ginger” so to appease her, her registered name is “Precious Ginger Lace” but she was always called “Lacey”. For many years, she was as much mom’s dog as mine, and she would go to mom’s house every day for doggie day care, an arrangement that suited both of them very well. She was always the maternal one of the pack, laying down to be able to play with “Tootie” mom’s chihuahua, or getting between “Bubbles” and “Zoe” if there was a disagreement. I don’t think she has ever forgiven me though for getting rid of the sedan with a back window shelf and getting first a van and then a SUV. As a puppy she loved to ride on that shelf, and even when she outgrew the space she would smash herself into it and ride happily as possible back there. Like all my cockers, she loved going for a “ride” or better yet, a walk. Most of my friends (or family) couldn’t tell her and “Zoe” apart from each other until they either watched them for a while or listened for a bit. “Lacey” was my talker. If I was out of site, she howled, if I was eating, she made it know that she expected her share. If treats weren’t given fast enough, she let me know that too. If by chance I took one of the others for a walk and left her in the yard, the whole neighborhood heard about it. She grew up with my nieces, Megan and Michelle, and although she didn’t know many kids, she always loved them, and would shake and wag her whole body when they would come to visit. She never did seem to like playing “fetch” with a tennis ball, like Bubbles did, and if we got any stuffed toys, she soon had them un-stuffed. “Bubbles” carried around and proudly presented her guests a white teddy bear. Once Lacey appeared on the scene, that poor bear only lasted about a week and was the first of many, many toys that were destuffed or de-squeaked. I think performing squeak-ectomies was her favorite pass time. When “Bubbles” passed, and “Bailey” came into our pack, she remained the middle dog, even though she was the elder statesmen. She indifferently welcomed “Bailey”, then “Tiny” and most recently “Buddy” into our pack. I guess she was confident she always had and always would get her share, a fair share of everything….food, treats, hugs, and that there weren’t so many cockers in the house that I would forget to groom her (all though, I think sometimes she wishes I would) As she aged she got so many warts that I wouldn’t let anyone else groom her, because I didn’t want any of them nicked by the blades. Until recently, she seemed to never age. She just always seemed to look the same, the only thing that would change would be the length of her coat, occasionally she would just look overgrown, so that meant a time to be groomed. She never, ever liked having the hair around her ears groomed, or her nails clipped. From her first grooming to the last, it was the same. Lacey, you will be missed! 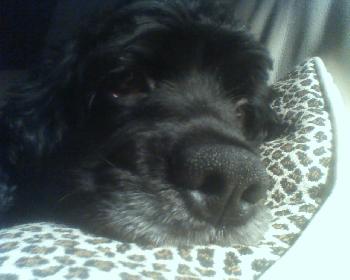 To All Of You, I am in Heaven now, and like my mom promised when she was holding me and loving me NO ONE CAN EVER HURT ME AGAIN ! I'm sending this note hoping all of you will remember,: Like you we have hearts and souls. We come to you with only one thing in our hearts and that is love! Our love is so strong that we instantly develop something you have named FORGIVENESS. We will hold onto these things through our beatings, torture, starvation, harsh words and our sadness and fear because we are waiting for you to rescue us. Sometimes through no fault of our own the wait has been too long and our fears have grown too large ! It is not that we want to growl or bite for non of us would choose that over loving and being loved. We are sad and confused when we act like this but sometimes we just can't help it ! OUR WAIT HAS BEEN TOO LONG ! ! ! ! ! If you see anyone being cruel to an animal, remember you are the only voice they have, if you don't speak up... THEIR WAIT MIGHT BE TOO LONG ! ! ! Yes I am in heaven now and although it is a wonderful place just like she promised,,,,,,,,,,,,,,,,,,,,,,,,,,, there was someone I wanted to love, there was someone who wanted to love me ! WE JUST MISSED EACH OTHER ! ! ! ! LOVE ANGUS, and all of us who's wait was just too long ! 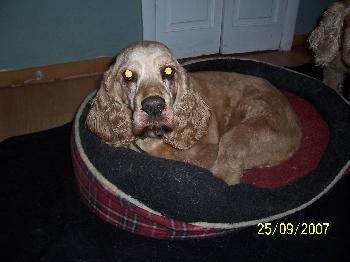 Patriot
Patriot was my first rescue dog. He came to me from the shelter with three legs (which we believe he was hit by a car), bb pellets in him, live fleas coming from his ears, and a heart of gold. After having him for six wonderful years, I had to say a tearful good bye to him on March 17, 2010. He had congestive heart failure and a muscle in his heart broke. We tried to save him, but he could not breathe. I know he is fully restored and in Heaven with my Mollie. I know I will see them both again one day. I love you my "handsome little prince". You were a tough little guy and you are deeply loved and missed.